The Rivers State Governor, Rotimi Amaechi was among governors that attended the wedding of President Goodluck Jonathan’s daughter, Faith at the National Ecumenical Centre, Abuja on Saturday. 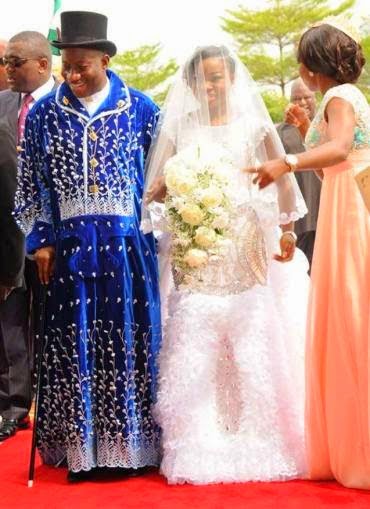 The relationship between Amaechi and the first family has not been too cordial since the last Nigeria Governors Forum (NGF) elections in Abuja last year.

Amaechi, who is presently the Chairman of the NGF, won the election with 19 votes against Plateau State Governor, Jonah Jang’s 16 votes. Jang left the election venue to form a parallel NGF.

He has since defected to the All Progressives Congress (APC) from the Peoples Democratic Party (PDP) along with some other governors.

The Rivers Governor attended the wedding despite the series of crises that have engulfed Rivers State since the NGF election.

He however left the church by 10.30 a.m. before the service ended.

The couple Faith and Godwill Osim Edward were joint in marriage after declaring their marital vows.

The General Overseer of the Redeemed Christian Church of God (RCCG), Pastor E.O. Adeboye ministered at the occasion.

He spoke on five areas including the bride, bridegroom, and unmarried youth.

Quoting Ephesians Chapter 5, verses 22 to 25, he said that the success of the marriage largely depend on the head of the family.

He urged the wife to submit to the husband if she wants peace in the home, irrespective of the passion for women liberation globally.

Adeboye also urged the Bridegroom to listen to the advice of the Bride.

He warned the relations of the couple to avoid interfering in the marriage.

He reminded the congregation of the coming marriage of the Lamb between Jesus Christ and the righteous on His second coming.

Vehicular and physical movement around and within the Central Area of the Federal Capital Territory (FCT) were hampered on Saturday due to the marriage.

There was grid lock in some areas leading to the venue.

Among the governors who attended the marriage in the church include Theo  Orji (Abia State) and Martin Elechi (Ebonyi State).

Former President Olusegun Obasanjo, in a white Agbada, arrived at the church wedding few minutes after 11a.m after Adeboye’s sermon had ended.