Ex- Niger Delta militant and leader of the Niger Delta Peoples Volunteer Force (NDPVF) Mujahid Asari Dokubo revealed to his fans how he sees the new Emir of Kano, Sanusi Lamido Sanusi, describing him as a dog.

The picture was a dog dressed like an Emir, completely in white. Asari asked, ”So a dog can become an Emir? Congratulations Rabiu Kwankwaso.” 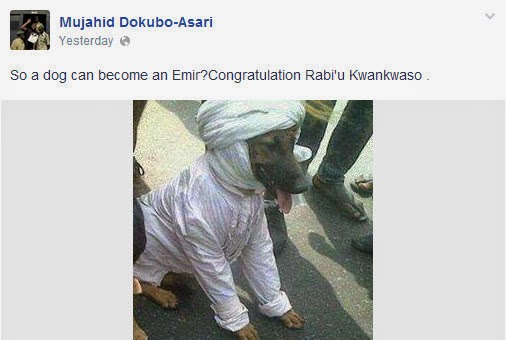 Asari who didn’t stop at his Facebook page, took to his twitter handled. While he congratulated the All Progressives Congress, APC, on their new Emir, he said he was wondering if the late Emir died a natural death, adding that APC people are very desperate.

APC congratulations on your new Emir,Emir of kano/APC ..
These APC peeps are so desperate I doubt if the emir had this rest naturally!

Asari-Dokubo is one of the many forces supporting President Goodluck Jonathan to run for a second term. He has threatened mayhem if Jonathan failed to secure a second term ticket in the 2015 presidential election.

Asari is one of those who believes that Sanusi Lamido, the new Emir of Kano could have a hand in the current insurgency in the country.

He has also challenged the Governor of Borno State, Kasim Shettima, accusing him of orchestrating the kidnap of the Chibok Girls. Asari has been rallying against the believe that the more than 200 girls who were kidnapped from their hostels on February 14th is real. The Ex militant had earlier called on Shettima to bring back the girls, saying it was a plan to drag the name of the President to the mud.

Copyright 2020 Naija Center News. All Rights reserved. This material, and other digital content on the website, may not be reproduced, published, broadcast, or rewritten or redistributed in whole or in part without prior express written permission from Naija Center.

US Lambasts Tinubu Over ‘Rig And Roast’ Threat

US Based Nigerian Entrepreneur Commits Suicide Over Rape Allegation In Florida